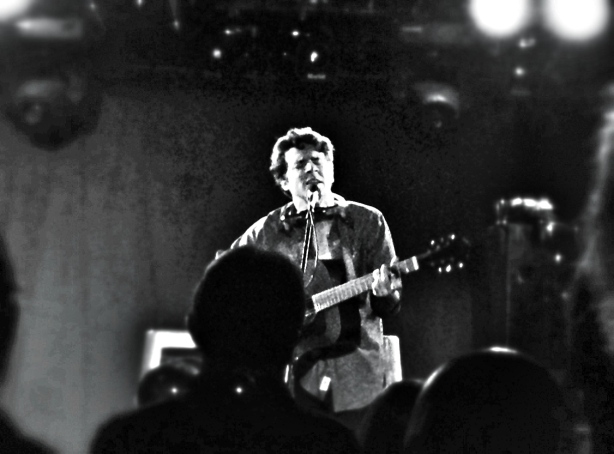 This night of folk and country music kicked off with the soft and lilting sounds of Patrick James who was accompanied by a banjo/mandolin player and who showed right from the opening notes that he is another of the many outstanding new singer/songwriters emerging on the local americana scene. His was an indie folk set of songs in the realm of Fleet Foxes yet his songs felt suburban rather than pastoral. His proficiency on guitar and a wonderful rangy voice impressed, especially as the means to easing into a Friday night of music.

Little Bastard on the other hand turned everything up to eleven – volume and tempo – and kickstarted a barn-dance on the sticky Annandale floor. They are a seven piece band that know the power of playing in unison and how a bands onstage demeanor can translate to an audience letting their hair down too. After a couple of nights on the road with Joe Pug they admitted they felt a bit tired but their performance showed no such signs. They played an entertaining and energetic set of rattle and shake country and agit-folk that sounded like Joe Strummer cutting loose with a speed-fueled Calexico.

Joe Pug is another of those solo artists who has built up a devoted fan base and reputation through intensive touring, much like Justin Townes Earle and Jason Isbell. Repeat visits to Australia have built him a progessively larger audience and though he didn’t fill the Annandale it was a much bigger crowd than a few years ago at Raval. He really is the consummate performer with his mix of genial stage banter that showed he is a humble and sensitive realist, some wonderfully nuanced guitar playing and a voice that, despite a propensity for Dylan-esque shapes, still carves out some distinct melodies of his own. His lyrics and their delivery were a real highlight that showcased his knack for storytelling that hits in the head and pulls at the heartstrings, especially on songs like Silver Harps and Violins, How Good You Are and Hymn #101. Pug had most of the room in the palm of his hand for the entire set, hanging off every note and word, the sure sign of a master at work.

this review was first published in Drum Media