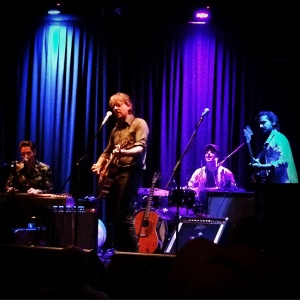 Melbourne’s Lost Ragas set the scene early with a set that felt more low-key than some of their other recent shows but it was by no means any less captivating. Their sound was a widescreen take on soulful blues and country with flashes of Beatles-esque and 70s power pop. From tales of 1970s motorcycle daredevil Dale Buggins to the emotional clarity of Marijuana Mornings they hit an effortless zone where the rhythm section laid down just the right depth of rhythm for Matt Walker’s voice and guitar and Shane Reilly’s sublime pedal steel to convey the emotion and melody.

The Felice Brothers never quite seem to fit the template of an alt. country/folk group. For one the accordion isn’t an instrument that regularly appears on stage yet James Felice made it a central and essential part of the band’s sound and stage presence. Visually they’re a rag-tag bunch. Fiddle player Greg Farley looks like an American footballer, bassist Christmas Clapton’s face expressed not an ounce of emotion as he leant against the wall and at one point sat down on the stage to play while James played the role of spokesman and audience conductor. Ian Felice, the guitarist and main vocalist looked as wire-thin and bedraggled as he always does, frail even, yet when he sang with that gravelly rasp of a voice you could hear the strength and spirit of Guthrie, Dylan and others running through their folk/country dirt songs. The expected highlights (Frankie’s Gun!, Whiskey in My Whiskey, The Big Surprise) were played but songs from the recent Favorite Waitress album were particularly vital and well received before they concluded with a surging and restless cover of Neil Young’s Rockin’ In A Free World.

this review was first published in The Music