Jed Rowe recently released his new album The Last Day Of Winter, a collection of songs of which we said “Rowe’s songs fall easily on the ears, drifting by with a US West Coast feel, rich in vocal harmonies and slide guitar”. He’s been touring the East Coast of Australia recently to celebrate the new album and this weekend both he and Alison Ferrier will release their respective records in their hometown of Melbourne at Bella Union on Saturday night. Rowe kindly took the time to tell us about the new album, playing in 16th century German churches and how he first learnt to play guitar.

Well first I’ve gotta say that I don’t consciously set out to write Americana or any other style of music, I like and listen to a bunch of different styles and I’m sure that affects how my own music turns out. Having said that I can remember listening to Gillian Welch’s Time – The Revelator a few years after it came out and being completely floored by the songwriting, the playing and the vocal harmonies and that probably steered me towards seeking out some more of the good country and Americana stuff that’s out there.

Describe your latest release in 100 words.

Making The Last Day Of Winter was probably the most fun recording experience I’ve had to date. I worked with some old collaborators (Jeff Lang, Alison Ferrier, Suzannah Espie) and some new ones (Cat Canteri and Justin Bernasconi from The Stillsons) and all the people involved knew each other pretty well already so it was a pretty laid back process. I brought in about 20 or so songs and let Jeff pick the ones he thought were the strongest. For some of the tracks we went for live takes with the whole band to capture some energy and spontaneity, and for others we recorded just my guitar and vocal and then built percussion loops, harmonies and other stuff around it.

One that comes to mind was a gig I played in Europe last year – I was touring with MerryGold, a bluegrass band from The States and we were driving to this show in rural Germany. We were just following the GPS and it told us to turn off onto a dirt road in the forest, which we did. The road started getting narrower and muddier to the point where we thought we were going to get stuck and have to get the hire car towed out. We saw a light up ahead and kept going, and all of a sudden we popped out and we were right at the venue which was a converted 16th century church. The show was full to overflowing with a mostly non-English speaking audience but they loved it and the show ended up being great. Such a strange and surreal night! 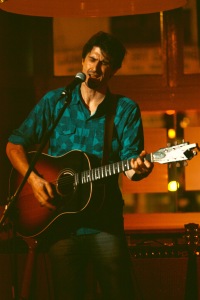 My parents are both musicians so I first learned to play guitar from my dad. I’ve had a few different singing teachers over the years who’ve all helped me with various stuff and I also had another guitar teacher for a bit. I think music lessons are great if you’ve got teachers who are still passionate about music themselves, but I’ve also learnt a lot just from listening to records and going to live gigs.

That’s a bit like asking a parent which of their kids they prefer, but at the moment I like ‘What I Want and How To Get It’ which is the closing track on the new record. It’s a great one to play at gigs because it’s a quiet solo guitar and vocal song so if you play it for the right audience they really tune in and connect with the song. I think it works because it’s a pretty melody and it reveals some vulnerability and people relate to that.

Neil Young might be fun, if he’s not too bitter and cranky by now. He’s written so many great songs across a variety of genres and seems to have really forged his own path.

Where I live in Melbourne there’s definitely a strong community of musicians playing folk & country based stuff. Having just come off an East Coast tour I’d love to see more community run events that give people who love music a chance to come and listen in an environment where music is the focus, rather than just an avenue to sell beer. Those gigs are out there, but they’re a bit of a rarity. Having seen how much both musicians and fans love those type of gigs I’d love to see a few more music focused nights popping up.

Easy question. Transatlantic Highway by Lost Ragas, a phenomenal Melbourne band fronted by Matt Walker. Great songwriting and killer musicianship. I caught their album launch show in Melbourne a month or so ago and was pretty blown away. It’s a bit of a crime that bands like this aren’t more widely known in Australia. They’re held in high regard by their peers but I’d like to see em tear up some major festival stages.

Well I’m halfway through a national album launch tour for The Last Day of Winter so it’s pretty hard to see too far beyond that right now, but I’ve got another music video release and some more touring in the works for later in the year. Once things settle down a bit I’ll get the songwriting book out again and start the whole crazy wheel in motion once again. I’m also hoping to do a follow up tour in Europe in the next year or so.

🎶 Kicking off the day at PTW HQ with the rock ‘n’ roll brilliance of Buddy Holly.
🎶 NEW MUSIC: The Deltaz – I’ve Been Rejected
More classic country sounds on the stereo with this fantastic comp Black Smoke: Gems From The Starday Vaults feat. Buck Owens, Cowboy Copas, The Stanley Brothers, Dottie West and more!