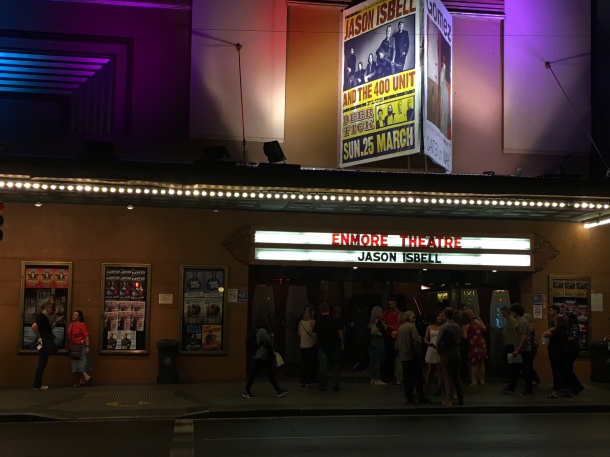 Sitting right at the nexus of Americana and southern rock is Jason Isbell. Since his tour of duty in Drive By-Truckers and through his subsequent breakthrough solo career, he’s found that sweet spot between the heartbreaking balladeer and the guitar shreddin’ frontman capable of belting out emotive rock anthems. With his band the 400 Unit he has the perfect musical companions and again they demonstrated their faultless ability to harness virtuosity, subtlety and unabashed rock ’n’ roll passion. 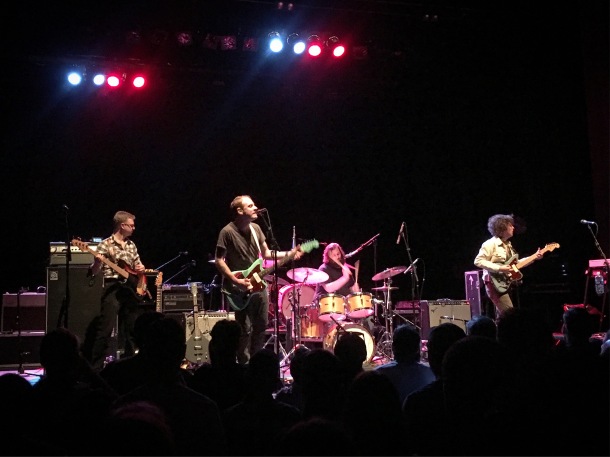 Deer Tick operate in the same orbit and deserve greater respect and recognition for the career they’ve slowly built over half a dozen albums. Hence it was great to see them play the large Enmore stage (go see them at the Lansdowne tomorrow night!), opening for their friends and contemporaries. They too make things sound effortless as they seamlessly travailed soul, heartland country punk, and dashes of folk rock. They’re equally at home harnessing pop peaks akin to Big Star as they are at navigating grungy alt-rock or an aching ballad such as ‘Only Love’ which main-man John McCauley wrote on his last visit to Sydney. With an unassuming bassist (belying his great playing), a burly, grinning powerhouse of a drummer and guitarist/singer Ian O’Neill with his dynamic stage presence, they were a majestic sum of their parts. ‘Jumpstarting’ from the second volume of the two albums released last year was a real highlight, encapsulating the band’s exceptional marriage of melody and carefree rock ’n’ roll.

Jason Isbell has played Sydney enough times, with his band and as a solo artist, that long term fans know exactly what to expect. I’d vacillated between going to see him again, after attending all his tours. I figured it’d be the same again, just with a handful of the new songs thrown into the mix. Music won of course and I was there and Isbell and the 400 Unit didn’t disappoint one iota. It was a setlist drawn from all corners of their discography plus an early treat in DBT’s ‘Decoration Day’.

Isbell is now deep enough into a career that he can skim the surface and come up all gold, with 18 songs that encapsulated the breadth of his songwriting and desire to embrace both the intimate and extravagant aspects of rock music. From The Nashville Sound we got ‘White Man’s World’, ‘Cumberland Gap’, Last Of My Kind’, ‘Molotov’, ‘Hope The High Road’, ‘Tupelo’ and ‘If We We Were Vampires’ – 70% of the album in fact. Elsewhere the highlights came thick and fast with ‘Alabama Pines’ and the deceivingly uplifting sing-along that is ‘Codeine’. Southeastern is widely considered the best album he’s released, with ‘Elephant’ and especially a devastating ‘Cover Me Up’ demonstrating the power of Isbell’s voice and his ability to extract maximum meaning and emotion from his razor sharp lyrics.

The 400 Unit are one of those unassuming bands that, on the surface, could be session players, there to enhance the ability of the name on the marquee outside the venue. Spend some time listening to each of them and that assumption is dead and buried. Each are consummate players with the nous and chops to know when to play and when to hold back. Nothing was overplayed, rather the details were in the nuanced moments – the sustained notes, the tightness of the rhythm section, the flourishes and textures of the keyboards. Guitarist Sadler Vaden (he has his own new single out) was outstanding, harnessing blues, country and classic rock chops. In the main set’s crowning glory we were left with an epic take on DBT’s ‘Never Gonna Change’, complete with playful call and response guitar solos from Vaden and Isbell and the band’s full throttle southern rock on display.

Returning to the stage for the inevitable encore, they played ‘New South Wales’ before leaving us with a low-key yet absolutely stunning take on ‘If We Were Vampires’ where you could sense the extent of the connection Isbell had formed with the audience as they hung on each poignant line in the song. I expected a final charge through a song like ‘Anxiety’ to round things out but it wasn’t to be and it wasn’t needed. Grand climaxes at rock shows are too often a cliche. This felt just right – a master songwriter reminding us of the refined beauty of his craft and the simple power of song.

🎶 NEW MUSIC: Nick Watt – Chimes in the Wind
The new beguiling and hypnotic album by @moonandfloodmusic (Blue Mountains, NSW) on the PTW stereo this morning.
On the PTW lockdown stereo tonight…