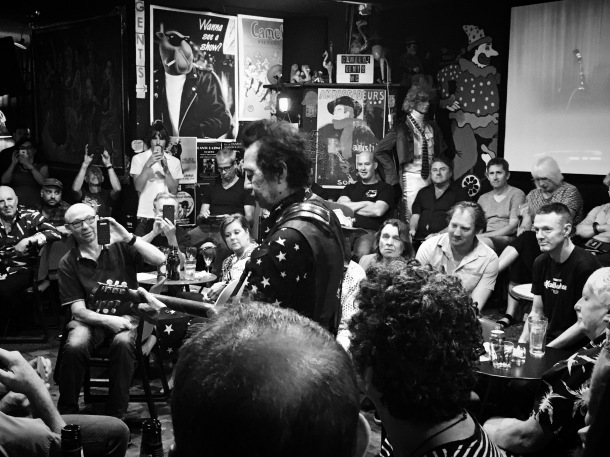 When a songwriter performs, you hear their stories through song and all its associated elements of poetry, melody, cadence, tone and tempo. Often the essence of the song is shrouded in imagery and lyrical abstraction and some digging is required on behalf of the listener. Alejandro Escovedo is a man who sings his stories with grace and grit and what made this show so special was the way he gifted us those songs to absorb and interpret while also regaling the audience with perfectly placed explanations and anecdotes that gave context to both his life and music. As a result, he held the full  attention of the audience for two hours with a perfectly paced and nuanced performance.

This is Escovedo’s first ever time in Australia and so, with Tim Rogers as trusty guitar (and backing vocal) sidekick, he took us on a journey through his music back-story – from influences such as The Stooges’ I Wanna Be Your Dog, to the earliest songs he wrote, songs from acclaimed albums such as A Man Under The Influence and his most recent record The Crossing. The combination with Rogers was a particular revelation with their interplay as guitarists – both electric and acoustic, and the mutual affection, respect and humour they shared, making it a wonderfully balanced and inspired pairing.

People (family, friends and mentors) were a common theme in the songs Escovedo played. Elderly neighbours in Austin, TX and troubled yet kindred spirits in Jeffrey Lee Pierce, Townes Van Zandt, Joe Ely were all referenced, as were his 12 siblings and the musical experiments of his own son. A particular tale about an Italian tour with Levon Helm, Van Zandt, copious wine and a wheel of cheese was both hilarious and poignant.

In each of the two sets he played, Escovedo ventured into the middle of the seated audience, playing acoustic and without microphone. It was intimate moment, stripped of stage lights and amplification, that drew the audience in, hanging off every word and strummed chord as he sang a brace of songs including a beautiful take on Mick Jagger’s Evening Gown. Back on stage, he and Rogers varied the energy and electricity with digs into some of the noisier tracks on The Crossing, including Sonic USA and Fury And Fire.

With Escovedo’s voice sounding even more resonant and powerful than on record, he commanded the room and showed that he’s still doing what he described as being the mission of one of his early bands, alt-country pioneers Rank & File, to blend George Jones and The Clash. This was quite an exceptional and commanding performance. One of those shows that will be talked about in years to come.