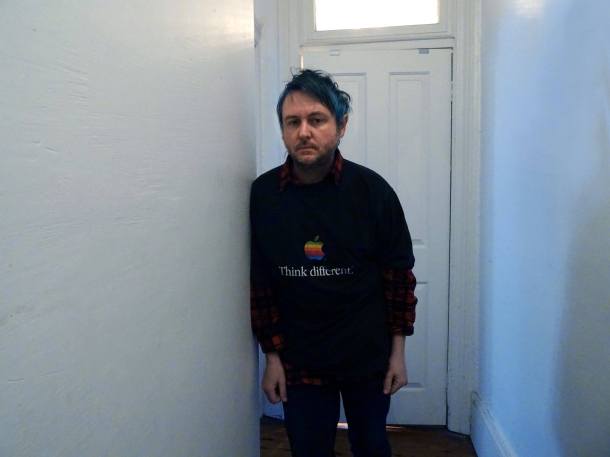 After two decades as a musician, Darren Cross is finally releasing his debut solo album _Xantastic. It is his personal view of the world around him and in his typically unique fashion it draws influence from two seemingly contrasting musical styles in Bruce Springsteen and Kraftwerk.

Sitting opposite Darren Cross in the Annandale Hotel in 2016 is a vastly different experience to seeing him perform there during its former life as an iconic rock ’n’ roll pub. Gone is the sticky carpet, south-facing stage, flailing limbs and high decibels. In their place is a sedate modern pub with natural light and a bustling kitchen.

Cross has witnessed these specific changes and the wider mutations of the music industry firsthand. As a founding member of noisy electronic/guitar pop terrorists Gerling, major labels came calling in the late 90s and critically acclaimed albums were released before the musical party came to an end in 2007. Initially Cross dabbled in dance music under the moniker The E.L.F. before settling into his current incarnations as one half of folk-noir duo Jep and Dep and as a solo artist trading in the dark, electronically-augmented folk music that comprises _Xantastic.

“I’ve had a lot of these songs for a couple of years now and I’d quit my day job in December to do my album as well as also doing Jep and Dep. I just want to play music and tour and you really need something out to be able to do that these days. There’s no masterplan – just write some songs and put them out,” says Cross, matter-of-factly.

With an album worth of straightforward acoustic folk songs in hand, Cross soon realised he need to “Just do what I wanted, without any respect to record industry genres.” That instinct to kick against the pricks was clearly still fuelling his creativity. “I wanted to rebel against that because I find it’s pretty vapid and putrid at the moment and I don’t want to be classed as an Americana guy or an electronic guy. I didn’t initially set out to do that, it just happened because that’s what I do,” he confesses.

“I’m a pretty spontaneous artist and I’d written all these songs with more of a Townes Van Zandt and Guy Clark sound – laid-back with catchy melodies, minimal arrangements and sad subject matter. I’ve been doing that for a while and when my girlfriend found a Kraftwerk LP in an op-shop I remembered we used to love Kraftwerk in Gerling and studied them quite extensively,” he recalls. “At the time I wanted the album to be like Springsteen’s Nebraska – minimal and lo-fi. Then I heard Kraftwerk and tripped out about how minimal that was and thought ‘Well, here’s Nebraska, all stark and minimal and recorded on 4-track and then here are Kraftwerk, the masters of minimalism.’ I thought ‘Why don’t I try to do both.’ A basic concept really. I changed a few arrangements, took some guitar out, added electronic parts and it just worked,” Cross explains.

Presenting your own thoughts, ideas and emotions as a solo artist for the first time can be an uncomfortable process yet Cross has produced an album with a sense of realism and an emotionally honest perspective on what he sees happening the streets and in the media.

“As a whole body of work it’s really just songs about things happening around me that I see. It’s more of a vibe and many of them are open to interpretation. The world is changing at the moment and everyones has their own agendas and with social media and smartphones they can voice it. These songs are just observations.”

Reflecting again on where we are sitting, Cross acknowledges that “the world has changed”  and though his perspective may at times veer towards pessimism, it’s his creative passion and ultimately his optimism that keeps him in the game. “There’s a guy washing dishes where I used to stand on stage and play guitar. Things change. No matter what happens, if people are spirited and independent then nothing can stop that. If you’re going to whinge about venues changing then find somewhere else to play, just put on a show in a backyard. There are always places. The economics are changing but I’m releasing _Xantastic on vinyl, touring and who knows, maybe I’ll be putting out a fanzine next. There are plenty of things that don’t change that much.”

One thought on “INTERVIEW: Darren Cross”