In previous years, gigs like this Out On The Weekend sideshow would most likely have taken place at the sadly departed Newtown Social Club, so it was nice to see a good sized venue like Marrickville Bowling Club being used for international shows, with its mix of music punters and old-school club members. 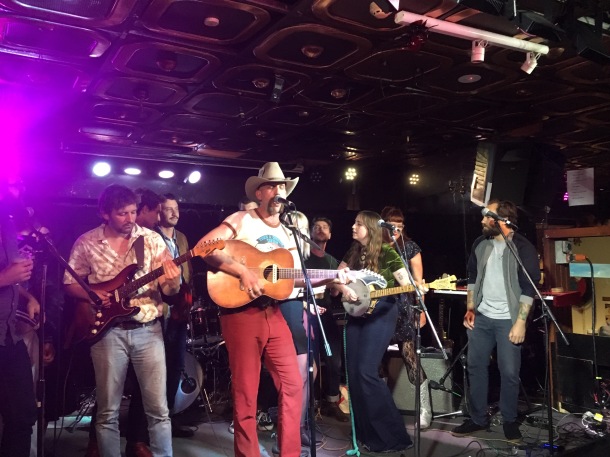 Andy Golledge and band, fresh from a US jaunt, did a stellar job at drawing the audience onto the dance-floor and in the process lifting the mood to one of celebration and free-spirited musicality. An album is apparently not too far away and based on the strength of this performance, which combined confidence, hook-laden songs and communal stage-packed singing, it promises to deliver on Golledge’s undeniable talent.

Sandwiched between the exuberance and energy of Golledge and Traveller, The Deslondes were certainly a different vibe, Hailing from New Orleans, they carry the laid-back shuffle and swing of that city’s music, drawing on all forms of roots music and filtering it through country and folk. They all sang and each showed virtuosity on their instruments yet it was done in such an understated way the songs quietly snuck up, working their way into the audience’s feet and hearts.

Traveller – Jonny Fritz, Cory Chisel and Robert Ellis – were resplendent in space silver, black and Nudie suits respectively, backed by the same rhythm section we’ve seen on previous Ellis tours. From the outset it was clear the trio have found a wonderful balance with what each bring to the group. Fritz is the default frontman, talking the most between songs, owning the centre of the stage and having the greatest influence on the humour in the songs. Ellis played some dazzling electric guitar and had a commanding solo spot with his own track Elephant. Chisel was something of the dark horse, the straighter guy to his goofier partners but his way with melody showed the importance of what he brings to Traveller, He too performed a solo song, his own Southern Arms, which silenced the room and brought tears to some eyes. It felt like an end of tour blowout, with a merch fire sale at the end and a room left buzzing and thoroughly entertained.