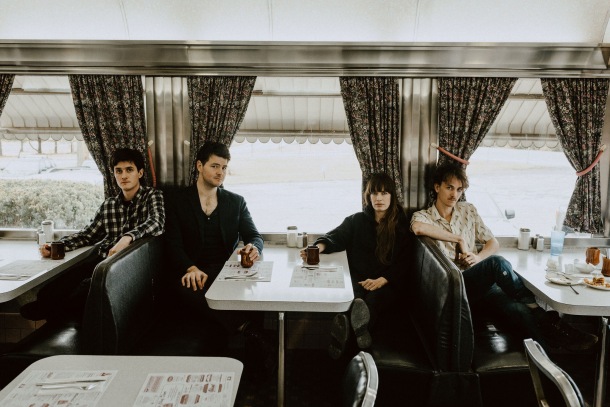 In 2019, The Felice Brothers returned with some changes to their line-up and Undress, a new album that manages to address both personal and political concerns, all with their trademark poetic imagery and organic musicality.

A year ago, in the aftermath of touring their album Life In The Dark, it was announced that long-term members Greg Farley (fiddle) and Josh Rawson (bass) were leaving the band to pursue their own musical projects and that Jesske Hume would be joining on bass. The brothers Ian and James have always been the core of the group and on a snowy Catskills, NY evening they’re both keen to stress that the changes have had positive outcomes.

“The band feels really great right now,” remarks Ian. “Everyone is singing which is exciting, there’s a bunch of harmonies on every song. Working as a vocal quartet is exciting, thinking about how we used it in the studio and what we can do with it in the future. With less musicians it’s more stripped down and there’s more space which is a good thing.” James is also quick to add that, “I think those guys were a big creative force in the band for many years, it had been the four of us, with a varying roster of drummers, for a long time so when those two guys left last year it definitely was a new chapter for us.”

Ian Felice is the core songwriter in the group and over the years he’s developed a style that incorporates cosmic imagery filled with wild and fascinating characters, like a kind of psychedelic Dylan. On Undress there’s a clear shift to more personal and also unambiguously political subject matter.

‘I wouldn’t say that I sat down to write a personal or a political record, these were just the songs that came out,” explains Ian. “I wouldn’t say it isn’t a protest album but I wouldn’t read it as having some kind of political voice. It’s not straight-ahead protest music, there’s abstraction in the perspectives.”

“We demoed 30 songs and then we recorded 15 or so and 12 made the record. That’s a pretty standard amount we have for each record, I write a lot of songs. The other ones didn’t fit thematically or maybe we just didn’t play them right,” Ian says, adding “I spend a lot of time writing daily, It’s just a routine part of my life. I just write and at some point I know I’ll have enough songs to create something.”

Looking back at the recording process and the finished album, James reveals that the band rehearsed the songs more than they ever had before, then headed into the studio and recorded the bulk of the record live to analogue tape.

“We recorded all the songs in a week and then re-recorded about half of them the second week because we realised there were things we’d missed or we could do better. On the musical side, we liked the idea of wider open spaces. We don’t have the fiddle anymore so we’ve gone away a bit from the folky, jangly acoustic guitar thing that we’d done before,” says James. “We wanted to let things hang around and focus on the voices because Will and Jess are really great singers and so it was a cool opportunity to add more harmonies.”

Specifically on songs such as ‘Special Announcement’ and ‘Undress’ there are direct references to the current US political climate, via humour and clever wordplay. Ian agrees that writing about such topics makes it easier deal with them. “It’s definitely a way to process it. Thinking about the different issues from different perspectives helps you process what’s happening the world to some extent. I don’t have a tendency to be too optimistic about the broader scope of the way human things are going. There are a lot of great things in the world but the problems seem to be pretty daunting. Hopefully we can finish some stuff off though.”

Recently The Felice Brothers reissued their debut, self-titled album to mark its 10th anniversary and looking back on that album and the ensuing decade, James can identify some core values that have remained at the centre of everything they’ve done. “No-one has ever told us what to do, we’ve never made any compromises and always throughout every single record and show, the songs are what matters. Everything else is incidental. Even on that first record the songs are central.”

I’ve had Gram on repeat for the last couple of days for a piece I’m writing for @rhythmsmagazine
AUSTIN, TX MUSICIAN JD CASPER WRITES A HEARTFELT SONG FOR HIS SON
ALBUM REVIEW: American Aquarium – Chicacomico