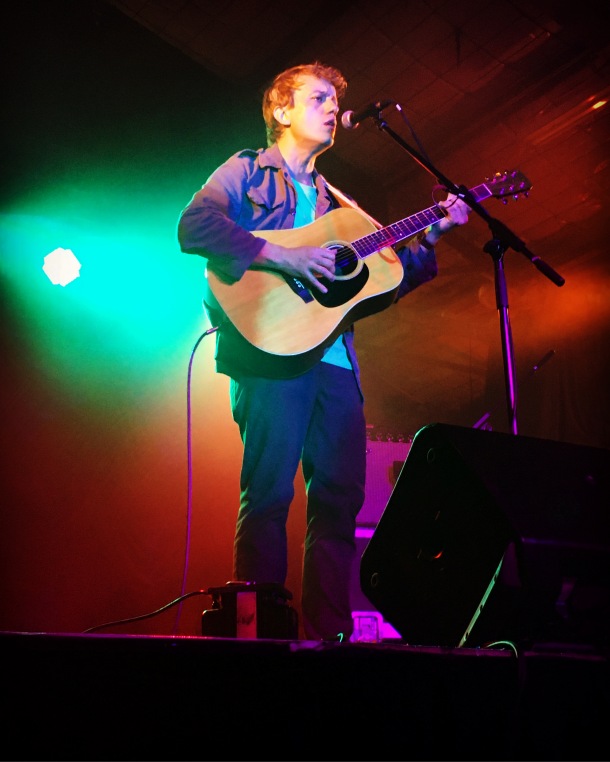 In the open warehouse space with its concrete floors, acoustic guitar strings ring out in fingerpicked melodies, notes woven together in a mantra-like fashion and underpinned by an ambient and vaguely disorientating bed of digital sound and field recordings. Andrew Tuttle sits to the side of the stage, periodically swapping out his guitar for a banjo, between diligent tweaking of knobs and laptop buttons, searching for that sonic sweet spot where his steel strings meet the experimental backdrop. Steve Gunn joins him for the closing improvised jam where the pair play off each other’s ideas in a display of simpatico and mutual accompaniment rather than six string one-upmanship.

Gunn fills the middle spot of the evening, a surprising move given his standing in the American Primitive guitar scene and more recently his shift into a more song focused realm. Tiny Ruins probably sells more records than Gunn though and she’s certainly toured here many more times.

What Steve Gunn brings to the stage is a languid, pastoral sound that is endlessly inventive – a perfect blend of exquisite guitar playing, reflective and questioning songwriting and a gentle push and pull between beauty and subtle discordancy in his music. Opening with ‘Old Strange’, Gunn shifted the air in the room to a pastoral expanse of open fields and tangled woods. Knotty melodies burst free into cascading runs of notes and precise and austere fragments of repeated acoustic phrasing. From that opening workout the songs emerged, yet he never settled into the traditional verse/chorus format. Instrumental forays would stretch for minutes before words joined the conversation – thoughts and phrases that acted as incantations, questions and ruminations. He’s found the optimal way to use his solid yet unspectacular voice and he uses it effectively to colour the songs, while his fingers do the talking. 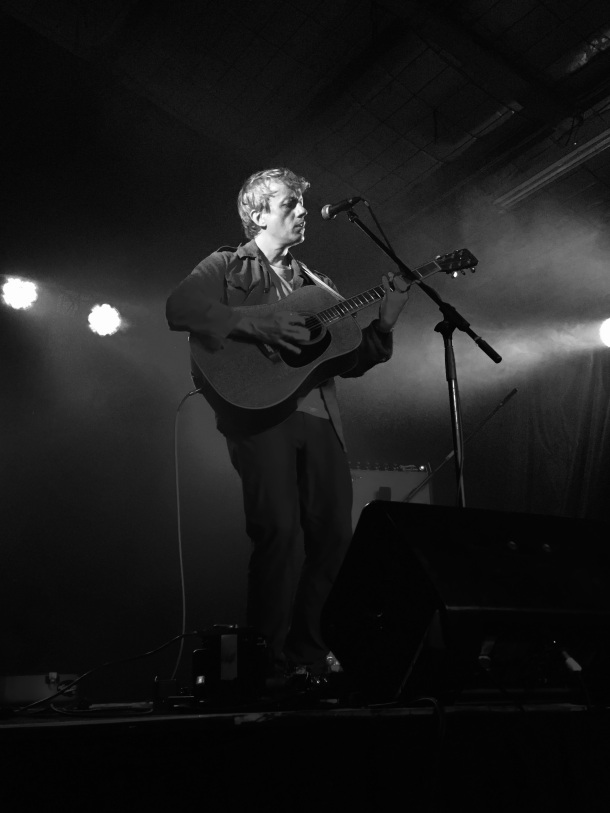 There was a cover of Michael Chapman’s ‘Among The Trees’ from his Window LP, among the many highlights of Gunn’s set. From his own back catalogue, ‘Way Out Weather’, ‘Stonehurst Cowboy’, ‘Luciano’ and ‘Vagabond’ were all highlights – especially in their stripped back form without a band dispersing the focus from Gunn’s guitar playing.

Tiny Ruins always plays beautifully and seemingly effortlessly, with just the right amount of phrasing, weight in both her playing and voice. Tonight though she was hindered by an unsympathetic mix where her guitar sounded like a harpsichord, brittle and thin and lacking the warmth and resonance that it usually has. It detracted from her songs and distracted the listener in terms of the ability to sink into the gentle hypnotic sway of her music as is our usual live experience. Still, the songs and her mastery of them still found a way through, despite the technical barrier.

It was an interesting full circle after listening to her album Olympic Girls and then seeing her play it live with her full band earlier in 2019 – and then listening to the solo version of the album she released more recently, before hearing those songs played live in the same format. Tiny Ruins treats her songs with respect and allows them to breathe and flourish in different ways – an artistic trait she shares with Steve Gunn.

🎶 NEW MUSIC: Nick Watt – Chimes in the Wind
The new beguiling and hypnotic album by @moonandfloodmusic (Blue Mountains, NSW) on the PTW stereo this morning.
On the PTW lockdown stereo tonight…