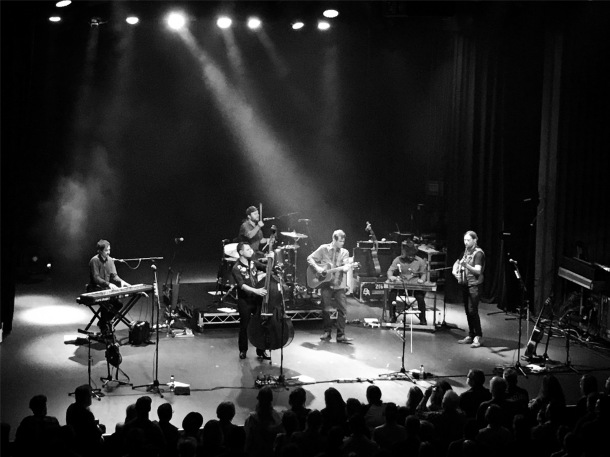 House lights were dimmed and, apart from a white cowboy hat and some impressive beards, four unassuming band members walked on stage and kicked into the opening song before Valerie June strode onstage with dreadlocks bundled high, a shimmering gold sequinned outfit and turquoise boots. She’s a charismatic performer, balancing the cute, cosmic and contemplative aspects of her personality in both her songs and audience interaction. Most of the songs came from her recent album The Order Of Time, including the tumbling, loose-limbed Shakedown, the African desert blues of Man Done Wrong and the gorgeous ethereal and lilting Astral Plane. Her voice can be an acquired taste for some but tonight she growled, whispered and soared high into the ether. 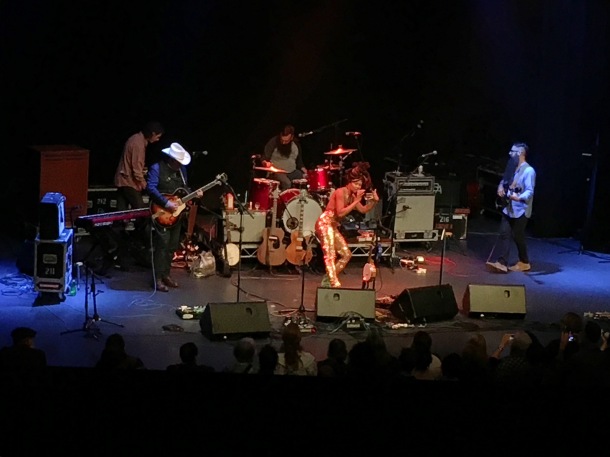 Old Crow Medicine Show decided to one-up June with an oompah band line dance arrival on stage. From the get-go it established the festive atmosphere of their celebration of the 50 years of Bob Dylan’s Blonde On Blonde album and carried both band and audience right through to an emotional finale.

All members of Old Crow are ridiculously proficient players, on multiple instruments – a factor that has enabled them to interpret each song with nuance and subtle flavourings. They keep the essence of Dylan’s songs intact but re-cast them as bristling bluegrass, Buck Owens styled two-step, country folk and in the case of Leopard-Skin Pill-Box Hat – vaudevillian comedy as Cory Younts leapt and danced around the stage. The entertainer aspect of their performance is part of what they do but they certainly over-egged it at times. Synchronised dance moves, comedy sketches and Ketch Secor’s over-emoting were pushed to far, the latter veering into Jim Carrey/Jack Black territory.

Of course the music is the most important thing and One Of  Us Must Know (Sooner Or Later) with Critter Fuqua on vocals was an early highlight, as was the raucous and propulsive Most Likely You Go Your Way And I’ll Go Mine. 4th Time Around was restrained and tender, as was the epic ten minute closer Sad Eye Lady Of The Lowlands that just kept rolling along.

The inevitable encore featured the signature sing-along Wagon Wheel before they took the night to a heartfelt and moving conclusion with three-song tribute to Tom Petty who had died earlier in the day. I Won’t Back Down, Breakdown and American Girl were a fine celebration of the great man, just as they’d done earlier with Blonde On Blonde, and received a standing ovation from the thrilled audience.